Bag from a free pattern on Ravelry

January 23, 2017
I love the idea of doing a crochet bag, but I always worry about the handles/straps. Mostly patterns seem to require bought handles that need attachment, or the handles are much thinner than I think they need to be on my own bags.

But this free slouchy hobo-style bag pattern on Ravelry seems to have a solid enough strap that I won't care. Perfect for some balls I've had in my stash for a while.

The only issue I have is that my balls are in 3 different colours: so I had to create some sort of pattern to the colours. I thought working each colour for roughly two rounds will work out about right: and it gives me an opportunity to practice carrying the colour yarns along, so I don't have to keep weaving in ends. Also it has the still look a bit random.

I did have some problems reading the pattern: because it's in US English. Obviously when I read SC, I'll do a double crochet, but I kept on doing double crochets when the pattern switched to DC. Perhaps I should have written it out again! 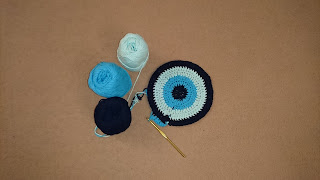 One evening and I'd done 10 rows. I could have done more, but I had to undo most of my work as I'd done the wrong stitches! I think at this point most of the base is done, as the last of the dark blue rows was in the back loops only, creating a nice ridge where I'm guessing the bag is meant to fold. 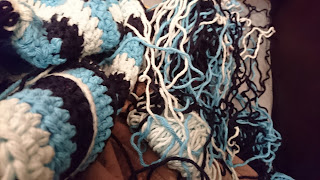 I've ended up not following the pattern too closely. But it was written rather roughly. The only time that got me into trouble was when I managed to make the strap narrower than I'd intended. I ended up undoing a fair chunk of work. 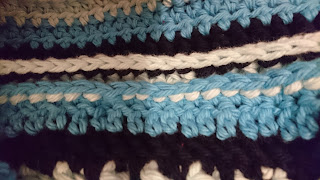 There's some really nice detailing on parts of the pattern: the front post treble makes a lovely ridged effect. You can see how it works in because of the different colours in this pattern. This happens to be the inside of the bag, which works out very well for me! 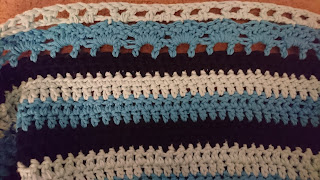 A bit of detailing from the pattern. 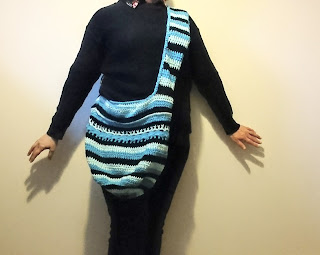 And here's the finished bag. I've run a row of SC around the edges, to hide where I've run the yarn along.  I'm hoping that by keeping the three yarns intact that I can undo the work and produce something else if ever I get bored with the bag!